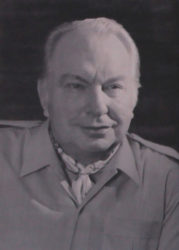 “A culture is only as great as its dreams and its dreams are dreamed by artists.” The quote by L. Ron Hubbard, founder of the Writers and Illustrators of the Future Achievement Awards, flashed across dual-screens flanking the fantastical, fantasy-themed stage at the Wilshire Ebell Theatre in Los Angeles, CA, presented by Author Services, Inc. and Galaxy Press on Sunday evening, April 10, 2016.

Celebrating its 32nd year, the contest honors rising stars in the science fiction genre. A prominent science fiction writer in the ‘30s and ‘40s, L. Ron Hubbard willed the royalties from his books to fund the achievement awards, in order to encourage a new generation of writers and illustrators every year and acknowledge their contribution to science fiction as well as their world.
The Black Tie Optional/Steampunk Formal event was attended by 13 members of Star Wars Steampunk Universe as well as by celebrities such as Catherine Bell, Jennifer Aspen, Jesse Kove, Jim Meskimen, Pepe Reyes, Irvin Rodriguez and The Winner Twins – Brianna and Brittany Winner. Opening to a steam-punk rhythmic body percussion “Stomp” routine, the night was sprinkled with impressive performances including EMCirque, a Cyr wheel performance, a life-size dancer/dinosaur puppeteer, and a Steampunk-themed flying machine. 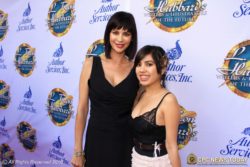 Science fiction was brought to life by the keynote speaker, Kellie Gerardi, one of 100 candidates for a future mission to Mars. A lifelong lover of science fiction, she told the crowd, “It doesn’t just predict the future, it inspires it…Writers, artists, and readers are all needed to create believers within a culture to bring imagination to reality”, and added with a touch of humor, “I don’t see a lot of cynics in this room.” After speaking eloquently on her passion for space travel, she was presented with a flag embedded with A USB chip containing all the stories and illustrations from the 32nd edition of the book, L. Ron Hubbard Presents Writers of the Future, to be included in the first library on Mars.
The contents of the book will showcase the work of the 2016 Quarterly Award Winners, presented with trophies and prizes during the Awards Ceremony: Jon Lasser, The Star Tree, Illustrated by Killian McKeown; Stewart C Baker, Images Across a Shattered Sea, Illustrated by Paul Otteni, Christoph Weber, Möbius, Illustrated by Talia Spencer; Stephen Merlino, The Jack of Souls, Illustrated by Maricela Ugarte Peña, Matt Dovey, Squalor and Sympathy, Illustrated by Adrian Massaro, Rachael K. Jones, Dinosaur Dreams in Infinite Measure, Illustrated by Preston Stone; H.L. Fullerton, Last Sunset for the World Weary, Illustrated by Camber Arnhart; Ryan Row, The Broad Sky Was Mine, And the Road, Illustrated by Jonas Spokas; Julie Frost, Cry Havoc, Illustrated by Vlada Monakhova; J.W. Alden, The Sun Falls Apart, Illustrated by Christina Alberici; Sylvia Anna Hivén, A Glamour in the Black, Illustrated by Brandon Knight; K.D. Julicher, Swords Like Lightning, Hooves Like Thunder; and Krystal Claxton, Planar Ghosts. 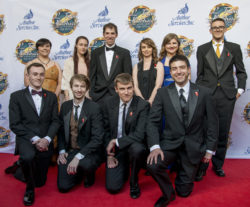 In a special tribute, Sergey Poyarkov was presented with the L. Ron Hubbard Silver Star Award. Arriving from behind the Iron Curtain and with only a few words of English, he became the first recipient of the Illustrators of the Future Golden Brush Award twenty-five years ago, and has gone on to become an international award-winning artist. His steampunk-themed artwork was chosen for the cover of the same Writers of the Future, Volume 32.
The 2016 Awards Ceremony marked the first time in the contest’s history that the Grand Prize Winners for both writing and illustration were recognized for their work on the same story. “I find it difficult to find words to express the profound feelings I am experiencing at the moment. It’s beyond words,” said Adrian Massaro, whose incredible illustration work spoke for itself and earned him the 2016 Golden Brush award and a $5000 check. For writer Matt Dovey, it was all about finding the words, receiving the Golden Pen award and his own $5000 check for his story, “Squalor and Sympathy.” In a very L. Ron Hubbard-like fashion, he used his own success as a springboard to inspire other writers. “Write without shame. Do what you do with confidence. Ours is the greatest genre, that of science fiction and fantasy. Don’t let anyone tell you otherwise. Speculative fiction is what we tell our children. If we are the writers of the future, it is up to us write the future.” 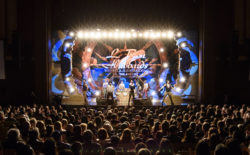 Dovey’s word echoed L. Ron Hubbard’s:“A culture is as rich and as capable of surviving as it has imaginative artists. The artist is looked upon to start things. The artist injects the spirit of life into a culture. And through his creative endeavors, the writer works continually to give tomorrow a new form.”
For more information on The Writers and Illustrators of the Future Award, visit writersofthefuture.com