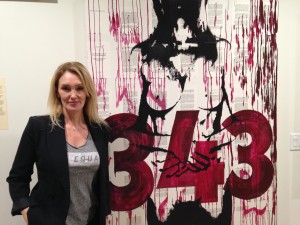 March 8, 2016-International Women’s Day-women’s work was celebrated in two mediums-film and canvas, at the Theater Raymond Kabbaz in West LA.

Six short films, all directed by women, explored topics ranging from female adolescence and love triangles to darker themes such as rape and domestic violence.  The films were selected from an initial submission of over 100 films to EROïN, an association dedicated to promote and value women’s creation in cinema, explained Audrey Clinet , who founded EROïN in 2014. 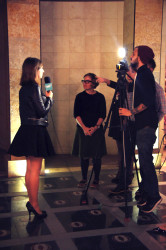 Facing gender-biased hurdles with producers and investors as female directors, EROïN aims to “disprove the idea that women are less talented” behind the camera.  Initiated in France and open to all genres from comedy to sci-fi, subject matter is not limited to women’s issues.  Indeed, one dark comedy , “J’aurais pas dû mettre mes clarks” starring a male struggling actor who lets his frustration ruin his big break strikes a chord for many in Los Angeles, regardless of gender or language differences .  Clinet also hopes to expand the scope of EROïN in the near future to include a focus on films in the United States.  All films were in French with English subtitles.

A complimentary wine and cheese tasting drew guests to the outside patio during the intermission, where they were drawn into the adjoining art exhibit, the “Remarkable Women Project” by artist Armelle Falliex.  Larger-than-life depictions of female cultural icons such as Oprah Winfrey, Shakira and Angelina Jolie graced the walls of the gallery as reminders of women’s impact on history. 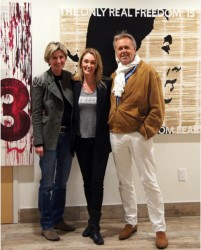 But it is not just their fame but also their conscious efforts in humanitarian or political advancements that have earned their place in Falliex’s artwork.   Simone Veil, of Falliex’s native France is represented by a woman’s body and the number 343 across the abdomen; the number of women, including Veil, who signed a statement sent to a newspaper stating that they had had an abortion.  This bold stand, combined with Simone Veil’s outspoken quest, resulted in a 1975 law legalizing abortion in France.

All women in the exhibit have been contributors to the advancement of women in society. 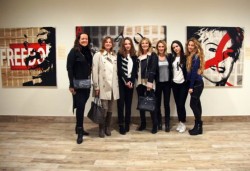 As an artist and mother of three, Falliex is concerned at the persistent lack of healthcare, nutrition and education in the world and aims to draw support from some of the very women featured in her artwork to create a foundation highlighting the details of their work at schools and universities in order to create awareness.  More on the “Remarkable Women Project” and the artist’s vision can be found at armellefalliex.com.